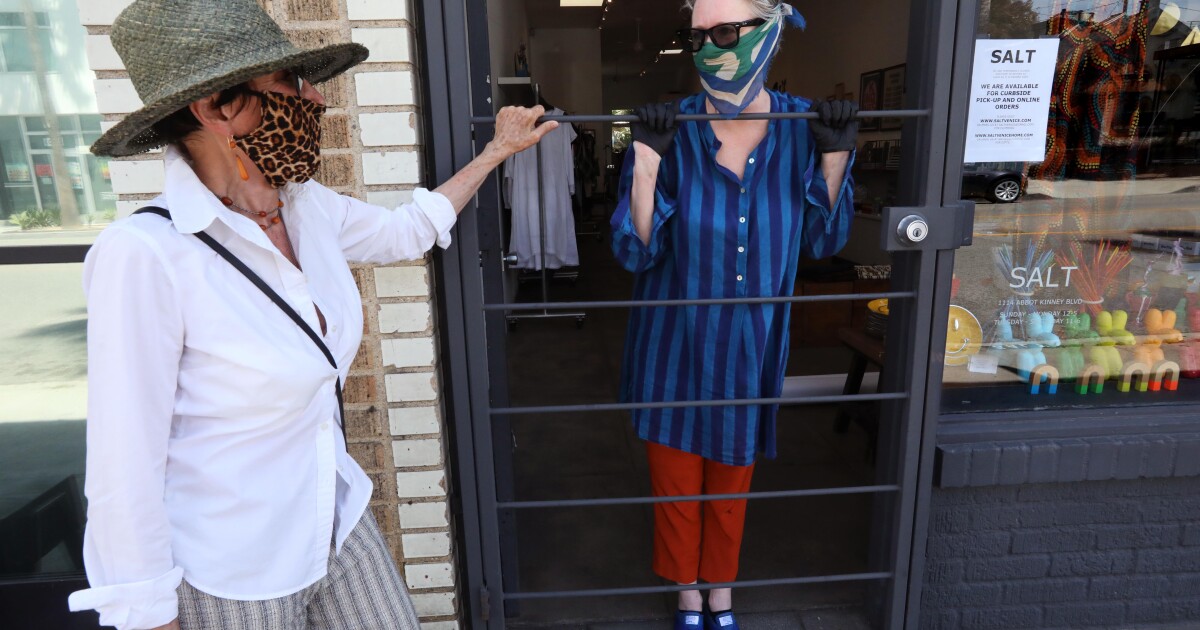 Some businesses, like her Abbot Kinney Boulevard shop, Salt, were allowed to reopen — but only for curbside pickup.

That presented a problem for Boies. Her small store sells mostly clothing. How, she wondered, were people supposed to buy clothes without coming inside and trying them on?

When she reopened Friday, sort of, business was practically nonexistent without the foot traffic she relies on.

The first day of California’s tepid reopening amid the COVID-19 pandemic was met with a mix of excitement from people desperate for some sense of normalcy and confusion from shop owners and customers trying to navigate a patchwork of orders from state, county and local officials, as well as the logistical challenges of not allowing customers inside stores.

On Friday, stores selling books, music, toys, flowers, sporting goods and clothing were among those allowed to reopen for curbside pickup only, unless barred by tougher local restrictions. Manufacturers and suppliers that provide goods for those businesses also were allowed to resume operations.

Businesses have been hunkered down since mid-March, when Gov. Gavin Newsom implemented a statewide stay-at-home order that closed all but essential businesses. Huge sectors of the economy and public life remain shut down, including personal grooming businesses, gyms, churches, malls and entertainment and sporting venues.

Some small-businesses owners have been critical of Newsom’s phased reopening plan, noting that big-box stores such as Target, Walmart and Costco have been allowed to serve customers inside their stores while mom-and-pops have been closed and now can’t let customers in.

Across Southern California on Friday, many small businesses, rather than attempt the awkwardness of sidewalk shopping, remained closed. Others hoped their window displays would draw customers and posted employees’ phone numbers and email addresses for pickup.

Leaders in Los Angeles and the San Francisco Bay Area have said they plan to take a cautious approach to reopening because the coronavirus remains a significant public health threat. Los Angeles County remains the primary COVID-19 hot spot in California, with nearly 1,500 deaths and more than 30,000 confirmed cases.

Officials in San Francisco, which has been more conservative than other areas, said Thursday that retailers such as bookstores, florists and music stores will be the first shops allowed to operate with curbside pickup — but that will not begin until May 18.

Three rural Northern California counties — Modoc, Sutter and Yuba — defied Newsom’s orders and allowed businesses to open earlier this month. Newsom’s administration on Friday warned that those counties could lose disaster funding if they do not comply with state orders.

In Venice, Boies already had been quietly offering curbside pickup, as had other stores in the area. She had loyal customers who knew the brands she carried and continued buying from her.

“We’re all doing it already,” she said. “How are we supposed to survive if we only have a website?”

She opened her shop 17 years ago, before Abbot Kinney blew up and GQ magazine called it “the coolest block in America.” She was there before the chain companies started arriving, replacing mom-and-pop stores and driving up rent prices.

Now, Boies is behind on rent and waiting for a small-business loan that, she hopes, will cover it and other bills. Her business does not qualify for the Paycheck Protection Program with only one part-time employee, she said. To survive the closure, she launched a website and Instagram page, but finding the same audience online that she has on Abbot Kinney has proved difficult.

She arrived at her store around noon Friday. A trio of bikers riding by paused to look at her display window, where she had colorful children’s toys and home decor. But they only wanted to know how the process of curbside pickup worked. They weren’t interested in buying anything.

Still, there were some people on Abbot Kinney on Friday.

Jennifer Angeles, 36, of Santa Monica learned that clothier Aviator Nation was opening up for curbside pickup from its Instagram page, so she decided to take her dog Reese out for a walk and buy a hat.

“I just want to support a brand I really love,” Angeles said.

Courtney Gillenwater was walking along the boulevard when she saw that a plant store had set out tables full of plants on the sidewalk.

“Oh my God, it made my day,” said Gillenwater, a doctor who had volunteered in New York to help treat COVID-19 patients. “The plants made me feel better.”

She didn’t buy any. But she said it was nice to see other people out.

In Seal Beach, customers at Devynn’s Garden, a small flower shop, were grateful to be able to pick up bouquets just in time for Mother’s Day. Sunflowers, daisies and succulents were lined up out front. The scent of gardenia hung in the air. About 10 customers wearing masks stood outside, trying to keep their distance.

Behind a table near the front entrance, a woman took payment from Scott Hayter, a 34-year-old special education teacher who had come with his 2-year-old daughter, Caroline.

“They’re for Mommy,” Hayter told her.

“It’s a way for people to pay rent and mortgages,” he said “Last I checked, that wasn’t free.”

In Whittier, Katrina Woerner, 37, arrived early Friday to prepare Mother’s Day gift baskets at her family’s bath and body care shop, Pour Le Bain, which was going to be open for two and a half hours.

Pour Le Bain had survived primarily on internet and social media orders. Woerner said the shop already had a few pickup orders in the queue and expected more as customers became aware of the policy.

“This helps,” Woerner said, “at least until we can open up.”

Curbside Enthusiasm: Retailers Adapt In A Time Of Crisis

Panera Drive Up Curbside Restaurant -Here’s How it works

Added to wishlistRemoved from wishlist 1

Saks Fifth Avenue Curbside Pickup- 3 Steps To How it Works- Why You will LOVE IT!

Hurley 15% off Coupon Code Just in Time for Christmas