How retailers are adapting to curbside pickup 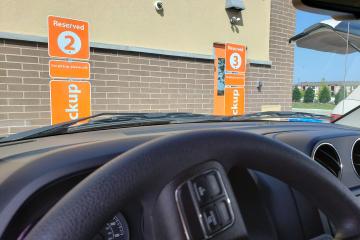 Never before have retailers have had to change focus so quickly and on such a large scale. Within the course of one week in mid-March, many shuttered their stores and moved to an exclusive model of curbside pickup that enabled consumers to shop online and pick up their purchases in the parking lot.

COVID-19 has changed everything in retail, and while there’s disagreement on what the future might look like, most believe that will never be exactly as it was before.

Now that states are starting to loosen restrictions, consumers will once again walk the aisles, hold merchandise and interact with associates. Analysts say while shoppers are eager to return to the traditional bricks-and-mortar experience, retailers should take the opportunity to refine operations now to prepare for a future that involves greater use of BOPIS and parking lot pickup.

A safe and convenient option

In late April, more than half of Americans were under some sort of stay-at-home order. While the impacts vary by state, some of which are starting to loosen restrictions, it’s likely the pandemic will have a long-lasting influence on consumer behavior.

More than three-quarters of consumers said they were interested in BOPIS; over 90 percent of those who have tried it said curbside was convenient.

Many major retailers had made the leap to curbside pickup as a means to serve customers in a safe manner while maintaining social distancing. Half of consumers have used BOPIS as a result of COVID-19, according to an April consumer flash poll by NRF, and a quarter have done so more than once. More than three-quarters of consumers said they were interested in BOPIS; over 90 percent of those who have tried it said curbside was convenient, according to NRF’s Spring 2020 Consumer View survey.

Curbside pickup has been a path of least resistance and an easy way for retailers and consumers to conduct business without being exposed to some risks associated with COVID, says Greg Portell, lead partner of Kearney’s global consumer practice. For some, that meant little more than putting up cones in the parking lot and bringing orders to shoppers.

“There’s very low risk for them in this environment, because the consumer expectation isn’t very high,” Portell says. “For many, it has been the only option.”

While curbside protocols vary by retailer, they typically involve consumers ordering online then retrieving the order in a store’s parking lot without getting out of their vehicle. Many retailers email the customer an order confirmation code to click when they are in the parking lot. The system is designed not just to increase convenience but to minimize human contact.

One of the biggest issues is helping shoppers figure out how it works, says David Marcotte, senior vice president of cross-border retail at Kantar Consulting. With each retailer having their own system of moving goods from the store to the curb to the car, where shoppers should park and how they interact, it can be confusing.

“People don’t want to mess up,” Marcotte says. “Trying to get people comfortable with what is going on is really critical. There’s a learning curve.”

Many retailers have used a “crawl-walk-run” strategy to establish a rudimentary system and optimize it along the way, says Jeff Baskin, executive vice president of global sales and marketing at Radius Networks. Those doing it well are the ones that had some sort of curbside pickup in operation before the pandemic and were able to instantly scale up with labor and technology, Baskin says; retailers like Best Buy, Kohl’s and Dick’s Sporting Goods had a curbside program already in place and are now taking the opportunity to refine it in a risk-free manner.

“Everyone realizes retailers and employees are doing the best they can, so there is a tolerance and forgiveness that hasn’t traditionally been there,” Portell says. “They really have an opportunity to try new things right now.”

Yet managing curbside pickup does come with challenges and requires the key components of labor, inventory, software, and physical access and setup, Portell says. While retailers need parking access and a system to keep the line moving, they also need a robust point-of-sale system, inventory visibility and flexible labor to manage it all.

Managing inventory has been a common challenge, especially as consumers’ erratic shopping patterns have pressured supply chains. For instance, while consumers started to hoard food and toilet paper in mid-March, there was also a run on laptops and home office equipment as many were forced to work — and school their children — from home.

Consumers also sought “stay-at-home” entertainment products like bicycles, balls, games, electronic devices and puzzles. While they valued supply, continuity and surety in the COVID-19 emergency, consumers will be more interested in value, assortment and optionality as things begin to loosen, Portell says.

Another key to success is a system to alert customers and stores, says Sucharita Kodali, vice president and principal analyst at Forrester. The system should note when a customer is nearby, when an order is ready and when it has been picked up. Most retailers haven’t had issues managing labor or space to support curbside operations while stores are closed. Yet that could all change once doors open and they try to balance curbside orders with in-store operations.

“Having customers in a store is the single biggest reason that omnichannel transactions have been so challenged over the years,” Kodali says. “The pandemic has helped each store replicate as close to a warehouse condition as they can.”

While there’s hope the pandemic will subside and retail will eventually go back to some sort of “normal” store operations, consumers have made a tremendous leap to adoption of new pickup models. Baskin believes even after store operations resume, curbside pickup and BOPIS will be double what it was before COVID-19 started. At that point, retailers will have to move beyond manual and experimental curbside options to optimized operations.

Here's what retail stores in Toronto are doing to get

Sam's Club launching curbside pickup at all stores nationwide, will

25% OFF + FREE DELIVERY
Added to wishlistRemoved from wishlist 0

Does Ikea Have Curbside Pick Up?

What does it mean to click and collect at IKEA? WE Love IT 2021